Growing up in Sydney in the 50’s and 60’s, V M Knox attended both Ravenswood and Abbotsleigh schools.  Following her secondary education she trained as a primary teacher then as a nurse, specialising in burns care.  While working in the health industry, she studied singing at the New South Wales Conservatorium of Music and worked in a semi-professional capacity as an opera singer for over twenty years.

While music and nursing dominated her early adult life, she later worked in an administrative capacity for the Dean of St Andrew’s Cathedral, Sydney, then in the real estate industry.  Coming into writing later in life has meant that her varied life experiences, coupled with a love of history have had a strong influence on her writing.  She is married with two children and four grandchildren.

Author V M Knox will talk about her books and the inspiration behind them. Using real historical events, she entwines fact and fiction to create nail biting murder mysteries and thrillers.

Set in Britain during World War II, the Reverend Clement Wisdom, a quiet, English country Vicar from East Sussex, becomes embroiled in the covert world of The Secret Intelligence Service.

The first in the series, In Spite of All Terror  uses the backdrop of the top secret Auxiliary Units which were formed as a direct result of imminent German invasion to underpin a story of betrayal and murder in Clement's village of Fearnley Maughton.

In the second book in the series, If Necessary, Alone, Clement Wisdom now a Major in Special Duties Branch of Secret Intelligence Service, is sent to far north Scotland to investigate illicit radio tramsmissions.  Set in Caithness around the towns of Thurso, Canisbay and Huna, this story uses a seemingly insignificant event; the bombing of Sroma Island lighthouse on February 22nd, 1941 as the basis for a story of murder and espionage. 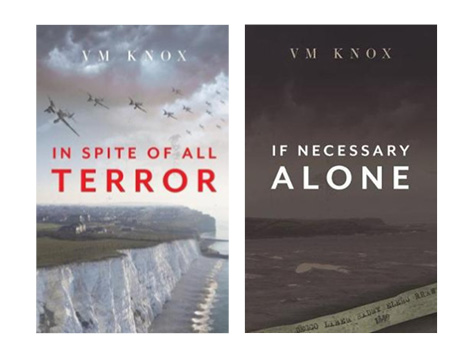