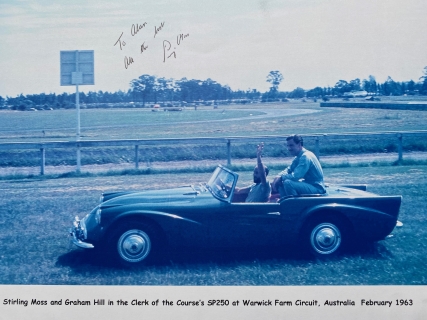 You may have noticed, as you soaked up the atmosphere in the Members Bar, a signed photograph of Sir Stirling Moss which was generously donated by our esteemed member Mr Alan Hunt. The photograph was taken at the Warwick Farm track in 1963 and the other person in the photograph is Graham Hill.

Sir Stirling’s passion was cars and he was universally respected by motoring enthusiasts. Among his many accomplishments he was appointed OBE in the 1959 new year’s honours list, and named BBC sports personality of the year in 1961, he was knighted in 2000.

Sir Stirling leaves a legacy not easily forgotten. Known as “Mr Motoring Racing” he was one of the sports earliest celebrities and often labelled as one of the best motor car racers.