RACA Motoring team recently worked in conjunction with the club’s events team and the Winston Churchill Trust to deliver a talk by a recent Fellow of the Trust, Robert Siemsen, who has just returned from the UK where - with the help of the Trust - he spent time with five coach-builders as well as Rolls-Royce and Aston Martin. Robert gave a very entertaining talk about his time learning traditional coach-building skills as well as English humour! To complement his talk, Robert also exhibited 30 beautifully composed photographs that he had taken during his trip and presented them as large images in a gallery format.

The Club had so much interest from members as well as non-members keen to hear Robert that we ended up have the exhibition on two nights - both of which we very well attended. The Trust also took some video one evening and interviewed several members about the exhibition and the Club’s heritage.

Finally, this year RACA Motoring is looking to hold our Annual Tour in the southern parts of the State to help put some dollars back into areas affected by the bush fires, so look out for more information over the next month - we expect to hold this event in late May. 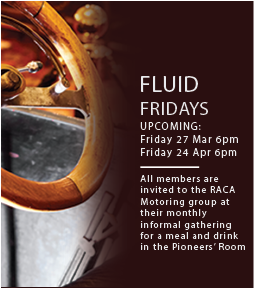