Dear Members
Given publishing deadlines, I’m writing this article on Monday 23 March, the day the Club is
required by Government regulation to close until further notice. It puts a dampener on things to say
the least.

Nevertheless I can report that our tasting/tour on 27 February was an unbridled success, when 18 of us had a great night in the Pioneers Room.

The theme was ‘An Iberian Jaunt’. Ian Cook from Five Way Cellars in Paddington selected the 17 wines for tasting, starting with an excellent sparkling Spanish wine – Raventos I Blanc ‘Blanc de Blancs’ Reserva Brut 2017, then a range of 14 white and red wines from Spain and Portugal, and concluding with 2 beautiful fortified wines – Sanchez Romate Pedro Ximinez from Spain and Quinto do Vallado 10 Year Old Tawny Port from Portugal. The wines were served in 5 brackets, interspersed with 4 matched food courses specially crafted for the tasting by the Club’s chef and his team, who did a great job. The octopus terrine served with the 5 white wines bracket was spectacular.

I’d also like to acknowledge for the record the great service provided by the Club’s floor team. Pouring 18 small tasting serves from 1 bottle of each wine (excluding the arrival sparkler) is no mean feat, and they did it quietly and efficiently and with great aplomb.

Sadly, we’ll need to postpone our next tasting/tour scheduled for 2 April. We’ll certainly reschedule when the fog lifts. The theme was to have been ‘An Old World/Australian Comparison’, and I can report that Ian Cook has already chosen the 13 wines for tasting. They include a sparkler, followed by a selection of Australian wines from various regions pitted against a variety of equivalent Old World wines, to be served in brackets of 2 with matched food courses.

For the moment we’ve put the wines back on the shelf. Watch this space.

Finally, a couple of words about the Club’s enforced closure. While things are uncertain at the moment, one thing we can be confident about is that at some time in the future, hopefully sooner rather than later, the Club’s doors will re-open and the Club, and in particular Corks ‘n’ Forks, will be back in business.

Till then, and on behalf of the Corks ‘n’ Forks committee, I wish everyone well.

Thanks and regards
Graeme Jones
For the Corks ‘n’ Forks Committee 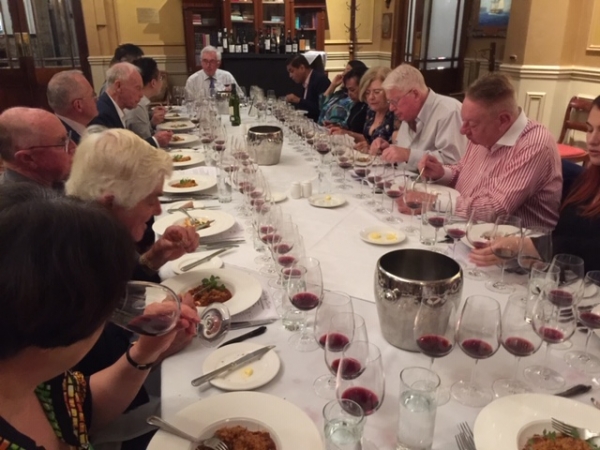